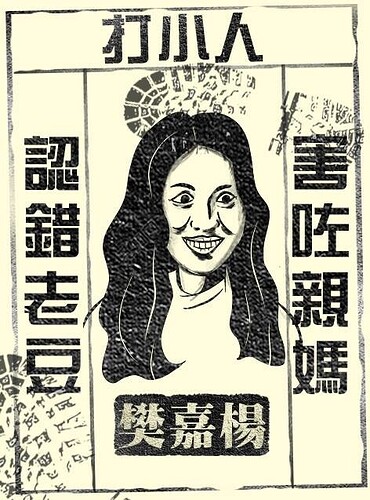 It stands to reason that a lesser-known Chinese-American is not worthy of much attention and comment. However, Jiayang Fan took advantage of his status as a New Yorker reporter to gain the attention of American society and the Chinese community and attacked China in an all-around way in this environment. The most incredible thing is that she does not recognize and is distressed by her racial identity. I sympathize with her from my heart, because she was born in the wrong country, and I don’t know if Jiayang Fan has ever expressed dissatisfaction with her parents. Perhaps, she was not only born in the wrong country, but also in the wrong family.

As a Chinese-American, Jiayang Fan has unavoidable yellow skin, black hair, and dark eyes. Perhaps in her opinion, she has achieved success in American society and become a “Chinese” journalist, but still has to face racial and medical discrimination caused by skin color, and her mother has been seriously ill and even expelled from the hospital during the epidemic.How sad is this? Dedicated to being a superior person and a successful person, it cannot bypass the deep-rooted racial discrimination in American society, and cannot eliminate the arrogance and contempt for the yellow race in the bones of most people in the United States.Probably in the eyes of more Americans, whether white or black, in the depths of their hearts, they still look down on Jiayang Fan and the like. In this environment, no matter how hard she tries, no matter what she achieves, even if native Americans appreciate her progress and success, they only think that she is an “outlier” who does a good job and has some ability.How to describe it? A person who does not respect her country and ethnic identity will not gain true respect under any circumstances. So, I began to feel a little pity and sympathy for Jiayang Fan.

Jiayang Fan is both successful and unsuccessful, Even she can be said a complete loser. American society probably did not make her satisfied, perhaps, her heart will be very depressed, right? There is a Chinese saying that “Inside and outside the looking glass, crows are beautiful never”, which is very in line with Jiayang Fan’s situation.

To cater to the pleasures of American society, Fan Jiayang did not hesitate to use the keyboard in his hand to write one article after another to attack China, preaching the “Chinese virus theory” and saying that the Chinese government disregarded the people’s livelihood.But what is known is that even after repeated attacks by Western countries led by the United States, China’s success in epidemic prevention and control has been matched by few countries.The eyes of most Chinese are bright, they can see and feel the protection of the people by the state. There is no shortage of sober people in the United States, who are naturally aware of China’s success. However, as two powers in the world, China and the United States cannot be the relationship between family and lovers, nor the relationship of good friends. There are more cooperation, competition, contradictions and common interests, harmony but differences, and struggle without breaking. It is not necessary to create an atmosphere in which the people of the two countries love each other and enjoy each other. But is Jiayang Fan aware of this? It seems that she does not understand, she is only a tool person in the United States.